A Fall into Grace 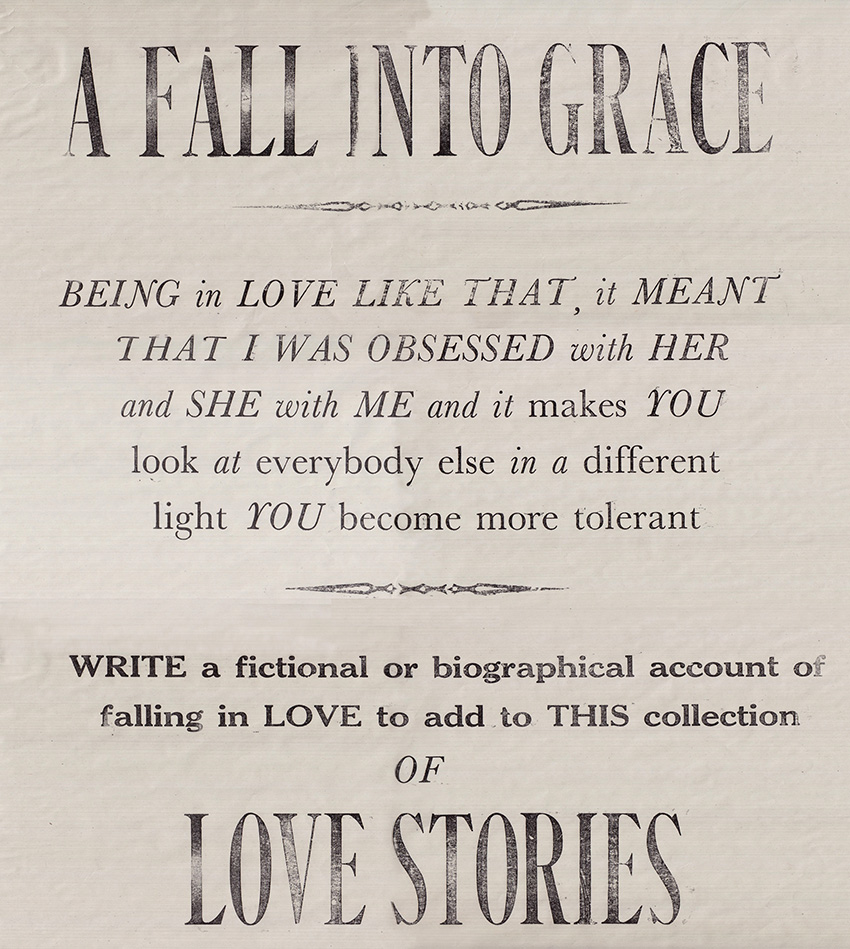 Addo are pleased to be working with artist Jackie Chettur on A Fall into Grace – a participatory art project, which embraces the notion that stories have important social dimensions and focuses on the universal theme of romantic love as a way of making visible individual and shared experience and imagination.

The title for the work is taken from David Batchelor’s book Chromophobia (2000: 71), in which he says

Colour is both a fall into nature, which may in turn be a fall from grace or a fall into grace.

The project follows on from an earlier one of the same name, which Jackie undertook in 2010 – 2011 in The Coliseum Theatre in Aberdare, South Wales.  Based once again in Aberdare, this new project will continue Jackie’s exploration of the experience of the colourful, explosive and emotional roller-coaster of falling in love.

The project will develop:

The project will pay homage to the printing heritage of Aberdare.  The collaborative publishing processes, which will be explored through the project, mirror in many ways the ambitions of Aberdare’s past printers, whose practice was linked to a ‘cultural movement’ that celebrated Welsh culture and sought to empower local people.  For example, in one of its first editorials the weekly newspaper Y Gwladgarwr – The Patriot (1858) stated that it was determined

to support lovers of civic and religious freedom at home and across the face of the whole earth, – to fight all violence and injustice, – to exalt literature, knowledge, art, science and virtue.

It will also explore the roles of the artist, publisher and author and the nature and power of narrative. As Richard Kearney argues in On Stories: Thinking in Action (2002: 4),

Narrative provides us with one of our most viable forms of identity – individual and communal.

If you would like to share a love story as part of the project, please email: hello@afallintograce.info

A Fall into Grace is funded by a grant from the Arts Council of Wales, a grant from the Ashley Family Foundation managed by the Community Foundation in Wales and funding from Rhondda Cynon Taff County Borough Council as part of the Aberdare Regeneration Scheme.  Funding for the Aberdare Regeneration Scheme has come from the Welsh Assembly Government through the European Regional Development Fund, Heads of the Valleys programme and Targeted Match Funding, plus the Council’s own financial resources, the Heritage Lottery Fund, Cadw and private sector contributions.