Robin Richards talks about his music, as recorded at the Gefail Yr Ynys forge with blacksmith Dylan Cadwaladr Parry, to Mary Anne Hobbs on 6 Music. https://www.bbc.co.uk/programmes/m000b7m5 (Robin’s piece is at 1:19:30) 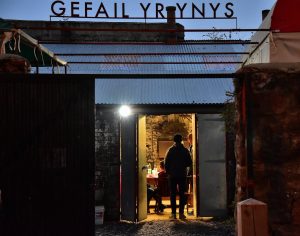 In 2017, Robin took up the role of artist in residence, with Addo as part of the STAMP Caernarfon project, at the Gefail Yr Ynys forge in Caernarfon, North Wales, collaborating with sculptor and mixed-media artist Mike Murray. Three of the pieces he produced during the residency are featured on his debut solo EP ‘Castel’, out 6 December on PRAH Recordings – http://smarturl.it/CastelEP?fbclid=IwAR0SfYURZpSgUiYgZ7Za9e4aKGFtu6eW1IoiURNYIBpDxSq3fcGQ0WQn61A

Robin Richards: “When I first visited the Gefail Yr Ynys forge at the start of my artist residency in Caernarfon, I wanted to utilise the room’s sonic potential and craft rhythms out of the incidental sounds recorded while the blacksmiths were working.

“I spent a day recording Dylan Parry sculpting a Welsh dragon from iron in the forge. The initial rhythm heard is the sound of the blacksmith banging the metal dragon into shape and knocking ash off the hammer. I noticed that the blacksmith’s thudding had a natural 120bpm rhythm to it.

“It also features recordings of the boats docked in the harbour and a steam train, adding layers to a piece dedicated to the industrial heritage of the Welsh town and its people.”

Since studying under composer and conductor Joe Duddell (New Order, Elbow, and Richard Hawley collaborator), Richards has picked up a number of commissions – notably including composing a new score for famed Hungarian-born director Paul Fejos silent comedy-drama Lonesome, as part of Manchester arts centre HOME’s Film and Music Project in collaboration with the Royal Northern College of Music. He also collaborated with visual artist Clara Casian on Birdsong – Stories from Pripyat, a film and original live score project inspired by personal testimonies of those affected by the Chernobyl nuclear disaster.  Most recently, Richards was commissioned to be the music director and composer for From The Crowd, an event commemorating the 200 year anniversary of the Peterloo massacre in Manchester.

Find out more about STAMP at http://www.stamp.cymru/en/gefail-yr-ynys-artists-residency-appointed/ and about Robin Richards at https://www.robinrichards.co.uk