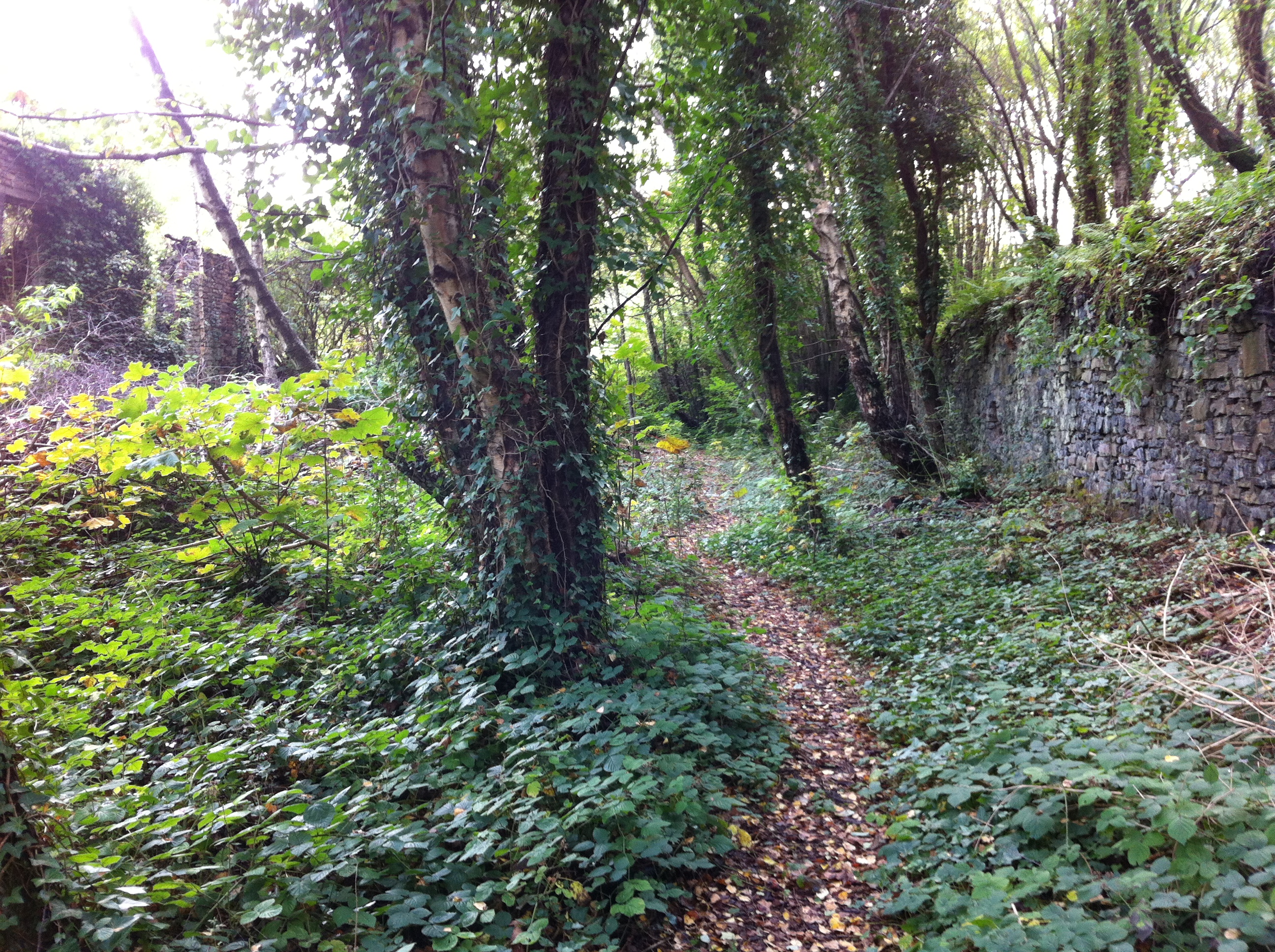 This residency is a collaborative project between the Arts Council of Wales, Glandŵr Cymru, the Canal & River Trust in Wales, and Addo.

We are inviting applications from artists with an interest in architecture and history with a collaborative/participative approach to undertake a residency based on the Swansea Canal in Swansea. The Swansea Canal is no longer navigable with only short sections still in water.

Working with staff and volunteers from the relatively recently-formed Glandŵr Cymru to draw out and reflect upon the role of the arts in making connections within and outwith the organisation and its constituency, paying particular attention to how Glandŵr Cymru engages with local people e.g. through volunteering opportunities, community adoptions and non-waterway related visits. This is particularly pertinent at this site, which is one of many across the network which was formally abandoned but restored due to the efforts of local volunteers.

The residency aims to embed artistic processes within Glandŵr Cymru’s core functions. The organisation is in a period of change and it may be possible for the artist to influence that change at this crucial time.

Glandŵr Cymru has teamed up with the Arts Council of Wales to create a series of artists’ residencies across waterways in Wales over a three-year period. This partnership is highlighting not only the heritage and historic significance of Wales’ canals, but also celebrating their current relevance to local communities and contemporary Welsh culture. The Trust is exploring how contemporary arts can play a new role in conserving, animating and re-interpreting the waterways in Wales.

Swansea Canal was constructed by the Swansea Canal Navigation Company between 1794 and 1798, running for some 16.5 miles (26.6 km) from Swansea to Hen Neuadd, Abercraf. It was steeply graded, and 36 locks were needed to enable it to rise 373 feet (114 m) over its length. The main cargos were coal, iron and steel. Sold to the Great Western Railway in 1873, it continued to make a profit until 1895. A period of decline followed, with the last commercial traffic using the waterway in 1931. Subsequently, parts of it were closed and filled in under a succession of owners, but around 5 miles (8.0 km) remain in water. The Swansea Canal Society, formed in 1981, are actively involved in its restoration. This industrial canal was built to serve collieries, iron works and copper works in the Tawe valley.

The Hafod-Morfa Copperworks, founded in 1810 by John Vivian, was located between the Swansea Canal on one side and a bend in the River Tawe on the other. Originally developed by Vivian & Sons, the canal was the principal transport artery for the works, through which coal was brought for the furnaces. A series of docks were built into the works from the canal for the unloading of boats.

During the 19th century, this was the largest copper works in the world, employing over 1,000 people. The rival Morfa works was established in 1835 by Williams, Foster & Co., and the two adjacent sites combined in 1924 under Yorkshire Imperial Metals. Swansea was core to the global copper industry, and by 1823 10,000 of Swansea’s 15,000 residents were supported by the copper industry. By 1883 there were 124 works including 12 copper works in the Lower Swansea Valley. But as raw geological resources had waned in South Wales, it became more economic to produce copper elsewhere. In 1971 the Lower Swansea Valley Project had started to transform the most derelict industrial landscape in Britain, resulting in the closure of the rolling mills in 1980. The former rolling mills were converted into the Landore Collection Centre, part of Swansea Museum.

In 2010, the local authority discussed plans to have the site re-developed where the listed buildings would be preserved and new uses would be given to heritage buildings. The 2010 development plan included a new hotel, restaurant and new housing. In 2011, the local council named Swansea University as a development partner of the site, who are evaluating the possibility of developing academic facilities at the site. Stage1 of the preservation and renewal of the site commenced in October 2013, clearing overgrown vegetation and undertaking other essential preservation works.

In its day it was one of the largest and most up to date industrial enterprises in Europe and by the 1840s Vivian & Sons were the largest exporters of finished copper in the UK.

Over the course of the 19th century the Vivians’ also built an entire settlement for their employees called “Trevivian” or “Vivianstown” and which we now call the “Hafod”.

Today the remains of the site consist of a core Grade II listed building and additional Grade II listed structures on a 12 acres (4.9 ha) site, on the banks of the River Tawe in Hafod, Swansea.

The artist will be based in Swansea but will be expected to work at and visit locations along the Swansea Canal.

There are opportunities to become involved with plans to develop the Hafod site. The project also offers the opportunity to highlight the canal’s significant heritage and its influence on the industrial and social history of the areas and communities that it connects.

The proposal is therefore to engage an artist for a six-month period during October 2015 to May 2016 to work with Glandŵr Cymru staff and volunteers in order to investigate and understand how the need for conservation and preservation and to manage  visitors  can still contribute to the local economy, well-being, education and enjoyment of the canal system. The opportunity is part-time and we are able to negotiate concentrated block visits with those artists travelling from further afield. Using the work done in the recent past as a starting point, the artist will build on existing links to complementary projects locally and regionally in order to aid Glandŵr Cymru’s aim to:-

In the longer term we hope that by working with artists Glandŵr Cymru will embed artistic working practices within their everyday structures, seeing these as important and relevant to their organisations on-going relationship with its public.

The broader aims of the project are to raise the profile of Glandŵr Cymru and the Swansea Canal in particular, develop relationships between existing groups and project partners, exploring and developing ways in which artists may contribute to the development of the organisation and its facilities.

Representatives from Glandŵr Cymru, ACW and Addo along-side key local stakeholders including Glyn Vivian Gallery, Swansea University and City & County of Swansea will form the Steering Group for the project. Addo will act as the main point of contact between the group and the artist, offering support to the artist. Local groups and associations will work with the steering group and the artist to identify local participants in the initial stages of the project.

The material outcomes of the residency are open but may take the form of temporary artworks created with input from canal users, volunteers and staff. There is also potential to explore and develop proposals for the future use of the site. Interesting and contemporary ways to explore and share the history of the site are a key feature of this proposal. Events such as exhibitions, workshops, talks, seminars, and tours may be key elements within the project. A large exhibition, featuring work from the artists across all seven planned residencies, is due to take place at a key Welsh venue or gallery at the end of the project in 2017. The artist will be expected to show work produced as part of this residency, or as a result of themes explored during their time in residence, in the final exhibition in 2017.

The artist will be someone interested in working within the industrial and agricultural heritage of Wales and particularly the canals of Wales with an interest in environment, architecture or design with previous experience of working with others to develop ideas. An ethos of collaborative practice and engagement is uppermost.

This opportunity is open to UK and International Artists.

• Creative originality and professionalism in their work

• An understanding of the issues of working in partnership and the concerns and opportunities presented by rural tourism.

• The artist must be aware of and abide by the laws for working with children and vulnerable adults, should they undertake such work as part of the residency.

• In the event of manufacture/installation of artworks by the artist, the artist must demonstrate current and appropriate indemnity insurance relevant to the artist in person and to any object/s to be manufactured.

The artist will be provided with a flexible space in Swansea, which could be used as a studio/workspace/meeting space/gallery.

The selected artist will be paid in installments to be agreed on appointment. This fee is inclusive of all travel costs, living expenses, and studio equipment.

To apply for this residency, please send the following information to tracy@addocreative.com by 5pm BST on Monday 5th October:

a DropBox containing the files. Information submitted in other formats will not be accepted.

Please note that we do not require a project proposal at this stage as we anticipate that details of activity to be undertaken as part of the residency will be developed following a period of interaction with the area, community and key stakeholders.

A panel of key stakeholders involved in the Swansea Canal Project will shortlist candidates for interview from the applications received.

Interviews will take place in Cardiff on 13th October 2015. Candidates must be available for interview during this period. Up to £100 per artist will be available to cover travel and subsistence expenses incurred by attending an interview. Interviews via Skype may be arranged.  At interview, interviewees will be expected to speak in more detail about their work and working processes and the approach that they envisage taking towards the residency.

If you have any queries regarding the recruitment process, please email info@addocreative.com

For queries and further information, If you have any further queries about this opportunity, please contact: Tracy Simpson, Addo, 07890203218, tracy@addocreative.com

Warning: Use of undefined constant convert_links - assumed 'convert_links' (this will throw an Error in a future version of PHP) in /homepages/35/d365284740/htdocs/addo/wp-content/plugins/brankic-twitter-widget/twitter.php on line 5

Warning: Use of undefined constant relative_time - assumed 'relative_time' (this will throw an Error in a future version of PHP) in /homepages/35/d365284740/htdocs/addo/wp-content/plugins/brankic-twitter-widget/twitter.php on line 27

Warning: Use of undefined constant bra_tweets - assumed 'bra_tweets' (this will throw an Error in a future version of PHP) in /homepages/35/d365284740/htdocs/addo/wp-content/plugins/brankic-twitter-widget/twitter.php on line 75


Warning: preg_replace(): The /e modifier is no longer supported, use preg_replace_callback instead in /homepages/35/d365284740/htdocs/addo/wp-content/plugins/brankic-twitter-widget/twitter.php on line 14